Why Do Dogs Eat Poop? A Look at Coprophagia
0 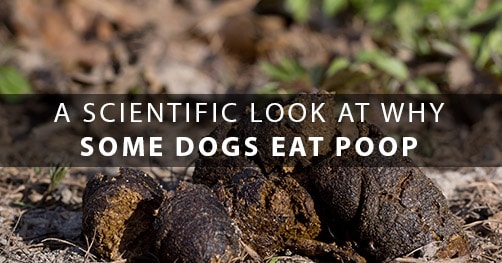 Why Do Dogs Eat Poop? A Look at Coprophagia

I love my dog. She cracks me up. She will do the funniest things. She digs when I am gardening; I think she wants to help! She even has brought me a dead animal as a present. But when I saw her eating poop, I was disgusted! Why, why, why? I didn’t understand. Why would my “best friend” do something so repulsive? We would like to think of our pets as humans, but dogs will be dogs and will continue to exhibit dog behavior, no matter how domesticated they are. Why would any animal eat feces? Dogs are misunderstood on so many levels. In fact, in the town where I live, working ranch dogs have been shot for eating poop. This poop-eating behavior is actually very common in the animal kingdom. There are many reasons why dogs or other animals eat a piece or two of poo. Let’s take a look at why.

The act of eating poop is so common that there is an actual word for it: coprophagia. For example, the dung beetle’s primary nutritional source is feces. Elephants, giant pandas, guinea pigs, and hippos are a few other species that consume this treat from time to time. Surprisingly, poop can offer a good source of nutrients. Rabbit poop is rich in enzymatic nutrients and vitamin B. An animal lacking certain digestive enzymes can have an urgent need to engage in coprophagia, especially if it has pancreatic insufficiencies. Malnutrition from a poor diet leaves a dog hungry and searching for proper nutrients. Surgeries involving the gut with the removal of intestines can lead to a lack of nutrients being absorbed, which can cause malabsorption and coprophagia.

Poop-eating behavior also has evolved as a protective mechanism, ensuring the pack’s survival. A designated pack member will hide the scent of a weak or sick animal by eating its excrement, eliminating any smells of weakness. Predators seek out easy prey such as the young. A lactating mother and her newborn pups are prime targets. Milk by-products in the puppies’ feces are a powerful and attractive smell to predators. Dogs eat poop as a means of keeping their newborns safe and clean.

A bitch instinctively will clean her pups during the birthing process. She eats the remnants of birth and will lick the newborn’s anus to stimulate the bowel process. This keeps the den free from disease. This process will go on for four to five weeks after birth. In some cases, a brood bitch (a female dog kept for breeding purposes) will continue this process throughout her life, regardless of how old the puppies are. Some females will ritualize this habit whether there are puppies or not.

Some dogs love to eat the little delicacy known as kitty roca. Cat poop in the litter box is extremely dangerous to dogs. Manufacturers say it is nontoxic for cats, but they don’t put a warning label on the box about consumption by dogs. Herein lies the problem: the cat litter molecules (or clay) are absorbent, soaking up water. When the kitty roca is swallowed, the dog’s intestines, mostly liquid, will combine with the cat litter to form a cement-like substance. The hard blob subsequently will stop any normal passage of feces, blocking the flow of digestion. This bad case of constipation wreaks havoc on a dog. Your dog can suffer many gastrointestinal symptoms such as gastric pain, belly bloating, nausea, vomiting, and more. If your dog eats enough kitty roca, its intestines can rupture due to the swelling.

Keep in mind that your dog can become ill from eating poop because it can carry parasites such as giardia and Coccidia. If it sits around for a few weeks, roundworm and whipworm have been known to populate poop. Herbivore feces from deer, goats, rabbits, and so on cannot transmit parasites to carnivores such as dogs, bears, and wolves. Interestingly, parasites are specific to the host they are carried in. Therefore, carnivores can be infected only by eating other carnivores’ poop! It’s a vicious cycle: the dog eats poop infected with parasites; the parasites gobble up the nutrients for fuel, leaving the dog hungry; and then the dog looks for more food, only to eat poop again. Getting your dog tested yearly for parasites can be a lifesaver.

Dogs eating poop may have developed as part of their evolution or for nutritional purposes; in addition, there are behavioral reasons. Allelomimetic behavior is the act of doing the same as others—basically copying a behavior. Some dogs might copy this eating habit, thinking it’s a good thing to do. Submissive dogs will eat the poop of a more dominant dog. This occurs when there are multiple dogs living in the same house. A stressed, nervous, or anxious dog will be driven to unwanted, odd behaviors. You’ll see this behavior in dogs that are confined to a kennel or chained up. They might indulge in excrement if they are bored, lonely, or neglected. If your dog is young, it might be exploring its world. Some dogs like the taste, which is very comparable to their warm, moist food as pups.

Dogs love things that taste and smell terrible to us. You might say some dogs have a sort of “refined taste.” We may not understand why dogs want to eat poo, but they do.

Just a side note: if you have a dog that eats its own poop, you can try feeding it pineapple. Half a chunk or one teaspoon will suffice. Pineapple contains the digestive enzyme bromelain. This chemical acts as a meat tenderizer. Some dogs have been known to be put off by the taste of pineapple in their own poop. It tastes good when it goes in but bad after it comes out!