How To Teach A Dog To Play Chess
1
SHARES
3 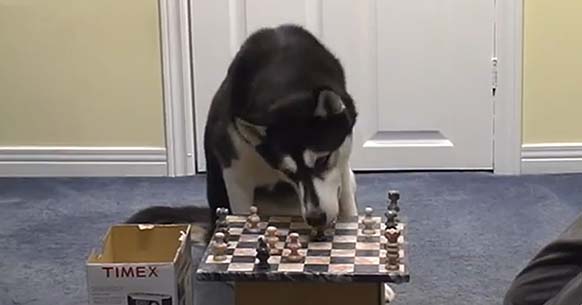 How To Teach A Dog To Play Chess

Have you ever seen a dog in a movie doing something totally amazing, such as playing chess, and thought to yourself, Wow, I wish my dog could do that!?

Well, this is the same reaction that I had when I watched the movie Bingo as a kid. In this movie the dog Bingo plays chess with his owner. While watching it, I thought, How AWESOME would it be if I could teach my dog this trick?

So that’s what I did. And I’m going to share with you exactly how I did it!

(I must write a quick disclaimer here that your dog won’t actually be playing chess with you but rather picking up pawns from the chessboard and putting them in a box beside it. It’s still pretty cool, and if you film it the right way, with a little bit of acting, it can look real! Make sure that you send me that video once you’ve filmed it! :-))

OK, let’s get started! I’m going to share with you the step-by-step training video, and then I will explain each step in detail below.

Introduction
This trick is fairly advanced, so if you’ve never trained your dog to do anything before then this might not be the best one to start with. But it can be something to strive for because any dog can do it, no matter what level of trainer you are now.

This might be obvious, but you will need a chessboard to train your dog to perform this trick. Make sure that the pawns are not made from a toxic material (e.g., lead paint) because your dog will be handling them with his mouth.

You might also want to find a chessboard set that has larger-than-average pieces so that it’s easier for your dog to pick them up. Plus, you have to be very careful and make sure that your dog doesn’t chew or swallow the chess pieces. That would be very dangerous, so be cautious, and always put the chessboard away when you’re not training.

Milestones
The overall objective of this lesson is to teach your dog to pick up a pawn from the chessboard and put it in a box beside it.

To ensure that the training is successful, you will have to focus on small steps along the way. I call these steps “milestones” because these are the small obstacles you and your dog must overcome to get the final trick.

The first milestone is getting your dog to pick up the chess piece and put it in the box. This should be done without using the chessboard (as you can see in the video).

The second milestone is all about conditioning your dog to the chessboard and the sound of a chess piece falling onto it. This is VERY important because it will prevent your dog from becoming scared if he drops a chess piece later on (and he will most likely will, as my dog did many times in the beginning).

The third milestone is to combine #1 and #2—in other words, the dog picks the chess piece up off the chessboard and puts it in a small box.

The fourth milestone is adding some extra pieces from which your dog must distinguish the right piece to pick up. You’ll want to add a few more chess pieces and train your dog to pick up ONLY the chess piece that you have chosen.

And the final milestone is mixing up the chessboard, really challenging your dog, and testing how well he understands what you want.

Reminders
Here are a few important tips to remember before starting your sessions:

Milestone #1 – Placing Pawn in Box
The objective is to train your dog to pick up a chess piece and put it in a box (without the chessboard present).

To begin, I recommend that you choose one chess piece and stick with it for the duration of the training. For my dog I chose the black pawn because it was the easiest one for him to pick up because of its rounded head. I would advise against training your dog to pick up the king because if you film your dog performing the trick and playing chess later on, the dog’s move would seem unrealistic and go against the rules of chess because the king can only move one space.

Next, you will need a box for your dog to put the chess piece in. I used an old alarm clock box, so it doesn’t have to be fancy.

Here is the list of steps your dog will need to master to perform the trick:

The first step will be to train the dog to pick up the chess piece in his mouth. Depending on your dog’s experience with picking things up in his mouth, you may need to spend a few sessions practicing this step before moving on.

Tip: After you click your clicker, your dog will automatically let go of the chess piece to eat the treat. You can use this to your advantage by sliding the box below where your dog normally drops the chess piece.

Eventually, you will need to make a change and click ONLY if the chess piece lands inside the box. And once your dog figures that out, you’ll want to gradually move the box away from your dog to make it more challenging.

It is important in training your dog to move along to the next step but not to make it too easy. So you have to GRADUALLY make it harder for your dog, but not so hard that he can’t successfully perform the steps of the training.

For example, when you start moving the box away from your dog, you don’t want to move it an entire foot away; you’ll want to start with an inch. And if the chess piece doesn’t land inside, then wait and let your dog try again.

Milestone #2 – Adapting to Sound
Now it’s time to acclimate your dog to the sound of a chess piece falling onto the chessboard.

I have incorporated this exercise into this lesson because I had an incident related to this topic happen with my own dog.

My dog had fully mastered this trick; then one day she accidentally dropped the chess piece on the board, which made a lot of noise and scared the heck out of her. After only this one experience, she was very reluctant to pick up the chess piece.

So it’s much better (and easier) to prevent your dog from becoming reluctant; simply conduct a few training sessions of dropping the chess piece on the board and then clicking your clicker.

Timing is crucial for this to work. Your dog must hear the sound FIRST and then hear the click, followed with a treat. Try to vary how long you have your dog take between dropping the chess piece. Sometimes wait a second before dropping it; sometimes wait five. This way, your dog won’t know exactly when you’re going to drop it.

Milestone #3 – Pick up Pawn From Box
OK, it’s finally time to get your dog to pick up the chess piece from the board and put it in the box.

This should be relatively easy if you’ve fully passed the first two milestones. The first milestone was really the most important, so if you are still unsure about your dog’s ability to pick up a chess piece and put it into a box a foot or two away, then you need to go back and practice some more.

Once you’ve positioned your chessboard, choose the side that you want the box to be on. This will be the box’s permanent location until your dog has mastered the trick. (You can always change it later on, but for now just pick one side.)

Place one chess piece on the board and reward your dog for picking it up and placing it in the box. If your dog drops it, put it back in the middle of the board.

Tip: You can make it a little easier in the beginning by placing the chess piece closer to the edge of the chessboard where your dog is.

Milestone #4 – Pick up the Right Pawn
OK, let’s make this interesting! Let’s get your dog to start distinguishing between the chess piece that you’ve trained him to put in the box and other pieces that you put on the board.

A good reason why I encouraged you to use the black pawn while training your dog is that it remains easily identifiable when you start adding a whole bunch of white pieces to the chessboard.

So begin by placing one chess piece at the end of the chessboard opposite your dog. For example, put a white rook closer to you and the black pawn closer to your dog. This will make it easy for your dog to pick up the right one. Then you’ll want to gradually move the two pieces closer and closer.

If your dog picks up the wrong one, simply ignore the behavior and wait for him to pick up the right one. Your dog will eventually learn that a reward is ONLY given for picking up the correct piece.

A great advantage is that you’ve been training your dog with the same chess piece throughout the first three milestones, so your dog will have gotten used to the look and smell of it, and it shouldn’t be too hard to him to figure out which one to pick up.

Milestone #5 – Mix the Board
This last milestone is all about having fun with the trick. Challenge your dog (and yourself) by moving the pieces around and only rewarding your dog for picking up the right one.

Your goal should be to have at least five pieces other than the black pawn on the chessboard and to have your dog consistently pick up the right one. But the trick is to mix them up every time after the dog performs the trick.

This will definitely challenge your dog to think.

Final Thoughts
Have fun with this trick! I know that you’re going to have A LOT OF FUN while training your dog to do it, and perhaps you will share a video that shows your dog mastering the trick with me. If you put a link to your YouTube video in the comments below, I want to see it.

And maybe you can build upon this trick. You could train your dog to move the chess piece to a different location on the board to represent a chess move, followed with a BARK to represent “CHECKMATE!” That would be fantastic to see on video!

See you during the next lesson or at one of my dog training programs!